The Music of Breathing 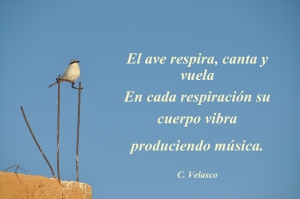 THE MUSIC OF BREATHING    By Carlos Velasco
Nada Brahma, the Universe is vibration of Brahma, creates in every instant worlds from overflowing pure love, thanks to Its Compassionate Breath.

The breath of an adult human being pulses 16 times per minute and in its expansion and compression produces the sound So Ham and Omm.
The universe vibrates and sounds. The whole human body is a musical instrument and every creature is made out of the vibrant energy of prana, and sounds with its own specific sound coming from the Great Prana.

Everything pulses in creation, everything is regulated by the law of the pulsation.
The pulsation is expressed in a movement of double forces, one centrifuge and the other one centripetal and is present in every part of existence; it pulses a galaxy, it pulses the respiratory mechanics and it pulses a cell.
The pulsation of the breath, like any other organ, expresses the movement of life. The expansion of the inhalation and the compression of the exhalation produce life, since everything pulses in the organism: the peristaltic movements, the pumping heart, the cranial sacral pulse, etc.
We have to consider that in the human organism several rhythms of movements or pulsations are given, that tells us about the vitality of the person.
The act of breathing produces music. When breathing, the bellows of the respiratory instrument produces musical sound. If the breath is vibrant inspiration accepting the Great Prana, then, breathing is inhaled vibration. In the respiratory wave of inhalation, apnea and exhalation, dance the atoms possessed by the ecstasy and enlightened by the energy of the Great Prana.

When the respiratory mechanic is done correctly, natural and free, it produces well listened and harmonious music due to the fact that every organism is integrated, (The respiratory, circulatory, skeletal muscle, visceral, hormonal, etc, organisms.), everything is in order.
Breathing is inspiration of the muses and it connects to the music of the spheres. Every gentle breeze of our personal prana travels the universe.

The music of the respiration springs from silence, of the apnea, without silence there is no creation, there is no music.
The unborn’s respiratory mechanics is in apnea —there is no movement— and it is at birth and with the first inhalation that for the first time air comes through its lungs.
Silence is the original support where the pentagram and partition sit, the inhalation-apnea-exhalation start composing the partition with its musical notes over the field of apneas/silences.
The diaphragm, or master beam Tai, is the interspace between these two worlds: the inhalation and the exhalation. The diaphragm is the force of the respiratory bellows that moves the quill of inhalation and exhalation, writing the partition of the respiratory music.
It is in the fertile void of breathing where audible music is composed. This fertile void/silence is the container, the content is the air that when entering or exiting creates musical notes. In this way, the emptiness of the respiratory bowl contains the nectar of the audible and harmonious breathing.

.
Breath and voice
Breath does not rely on the emitted word but the word does require of breath. Without an air column that makes vibrate the vocal cords, there will not be emission of voice, of the articulated word.
The sacred syllable Omm —the primal sound with which made and maintained creation— holds a big mystery. This sound must always be present in the emission of the voice/word of the human being. The sound Omm is a transport ship for the word, since thanks to Omm the word flows and runs becoming music. The sound Omm of this transport ship resembles the one which produces the bass instrument.
So Ham, the great manta of sacredness. Right at birth, our first breath produces the sound “so” in the inhalation and the sound “ham” in the exhalation. So Ham could be translated as: I am the Truth. This action and its effect allow us to remember the intimate bond we have with the Creator of Worlds. Reciting this, the lover takes the breath of Great Prana and returns it.
I am music thanks to breathing, this one impulses the vocal cords.
The music that lives in me awakes when the air column of exhalation caresses the vocal cords.
Thanks to exhalation the word, recitation and singing are created, in addition to a variety of sounds.
Breathing produces music inside me since I am a wind musical instrument. Just like air resonates into a cane, I am a vibrating cavity thanks to the blast of air leaning against the diaphragm and pelvic floor.
I am the breath that resonates through my all body. If my body is sufficiently liberated of tensions, the breathing mechanic will be healthy and the voice will resonate in my body, healing it.
But also, breathing can sound wrong when it is blocked by the psycho-emotional toxicity. If the breathing pattern in the daily life is not complete or integral, but that is only rib-collarbone or only abdominal and/or in three times, the music of the breathing will sound discordant, it will produce “bad music”.

.
Vibration precedes sound. Vibration produces sound/music
Breathing makes vibrate bodies and produces music,
The diaphragm descends and creates a vacuum of pressure, then the air starts to create a musical sound when entering through the nose, after through the pharynx until reached the trachea: there it is forked in two bronchial tubes, then bronchioles… all the way to 700 million of alveoli, expanding them. In exhalation the air creates musical vibration as well.
Be inhabited by breath and voice/word!
Biology of the voice
The voice is produced in the body; breathing, voice and word inhabit in the body
Let there be breath!, Let there be voice!, Let there be sound, music!
Breath and voice embody and take reality. The voice uses the body, because without body and without breath there is no voice, thanks to this body the voice embodies. Body respiration and voice have to harmonize, because in doing so, harmony will be created between them, they will be healthier. The physical and energetic bodies become unified.
The voice is produced in the body. The voice is intimately related with affectivity, emotions and feelings. Therefore, breathing, voice and affectivity get tangled in a fused unity. A fourth element can be added to this trilogy, very subtlety, the being or essence. Voice, breath-essence are interrelated. When the voice is harmonious, the essence becomes more present and vice versa.
Healing with breathing
Breathing is musical vibration, vital energy that flows through our body, especially through nadis or energetic channels.
The vibrational field is the root of every spiritual experience, inside or outside oneself, especially if we feel it when we are in an expansive state of consciousness, empty mind.
Our breath o personal prana has to tune in and unite, to get deeply involved with the Great Breath, Divine Verb, etc.
Every breath reaches us from the Great Breath, being a sounding flame that resonates within us and vitalizes us, since we are musical flame/breath.
Every breath that enters us and that inhabits us, is made out of musical vibration and makes vibrate and sets to music every cell of our body; like the living flame that fuels and maintains the flame of life alive that lives inside every one of us, and revives it.
Just like music has always had the great capacity of cure the psycho-emotional and physical to the instrumentalist musician and to other people/listeners, the music produced by our breathing heals us and heals also the others, since breathing cures the breather and with his or her own breathing he or she can heal others.
Audible breath makes vibrate the system of chakras
The human being is a cavity, a cosmic bowl similar to a flute, it is a musical instrument traversed by the Great Prana.
The personal prana nests in the body and animates its different states, having an impact with the breath in the keyboard system of the chakras, activating it and balancing it thanks to breathing.
This personal instrument of the keyboard of chakras can be obstructed or free, be played right or wrong.
Refining our natural and correct mode of breathing we balance the chakras producing a more harmonious music in every breath, the music that resonates with each breath.

By Carlos Velasco|Categories: Uncategorized|Comentarios desactivados en The Music of Breathing